Last Sunday we went to Brösarp and attendet the opening for the season for Skånska Järnvägar! It’s a society that keeps the history alive by working on and driving old steam trains. The theme for the opening day was "the 50’s". The boys have been anticipating this day, and they ordered "steam train driver clothes". They had waistcoats and shirts since before, but they needed pants.
﻿


I found the pattern Dandy Boy in Ottobre Design 6/2014, and it turned out really well. 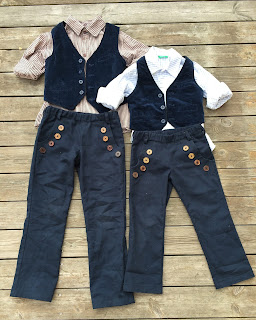 I used my new coverstitch machine to sew the belt loops. I made a three layer strip, took away the middle needle and stitched it in place. I was a bit tired that night, and did not change the looper thread. 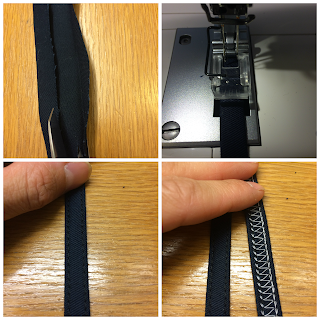 I also made it easy for me when I attached the waistbands, folded in half, stitched in place, put the elastics in, closed the seam, trimmed and overlocked the edges, topstitched in place. 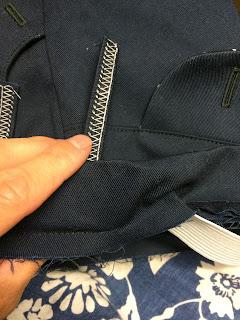 I have to admit that it has taken some time to finish these trousers! Mostly, because I realized that it was not a great idea to make trousers with 20(!) buttons and buttonholes. However, the buttonholes are "fake" and just for show. Eventually it was not the tedious work I feared it would be to finish the buttons. 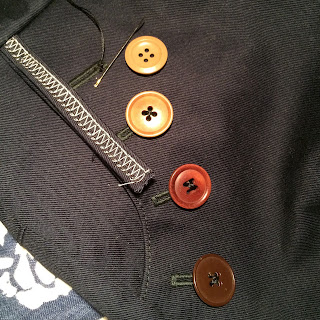 During our outing the boys got a lot of praise for their clothes! 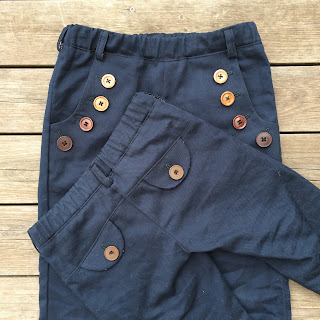 I still have some Alafosslopi yarn left after I have finished the Stryta sweater. I’m planning to make felted socks for the kids to wear in the car during winter. It gets really dirty when muddy, wet, winter boots kick the back seat of the car.


I have so much yarn and fabrics stashed, so I will do my best not to put the Alafosslopi yarn back in my personal stock.


To begin with I’ve made a winter cap for my husband! 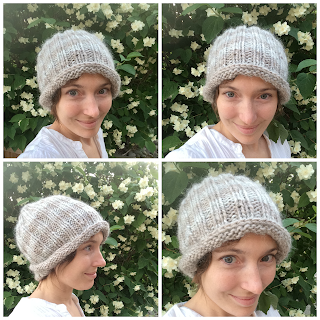 We’re in the middle of summer, with long, warm nights. But now is the perfect time to prepare for winter!
The pattern is from Joanne Seiff Designs, found at Ravelry.
Upplagd av Unknown kl. 04:59 Inga kommentarer:

Remake: Ottobre This and that tee

My son got an army tee from his uncle, and I used it to try another tee pattern, "This and that tee" from Ottobre Design 3/2013. 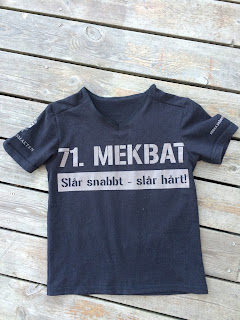 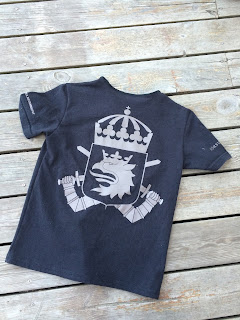 I intended to reuse the rib knit neckband, hence I sewed both shoulder seams. The original neck band was quite worn so I changed my mind and covered the neckline with fold over elastic instead. I was to tired to rip the shoulder seam, so I simply folded it over and stitched it in place. 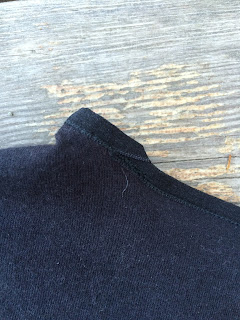 This was a perfect opportunity to try my new toy! 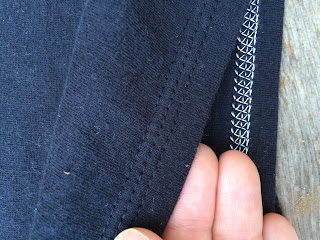 I have posted my pictures of the Jutland pants everywhere, but I realized that I’ve missed to post a close up on the blog! 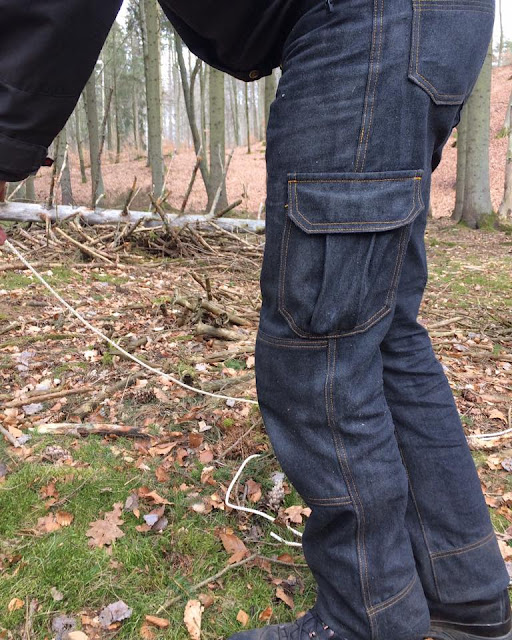 My husband has had these pair of trousers for a couple of weeks now, and he likes them very much. The stone washed denim fabric has been coated with Otter wax to make it water repellent. At first the waxed fabric was a bit sticky, but I really like how it softened the fabric when it cured.


The Otter wax is made of beeswax and a blend of plant-based waxes and oils. It’s the only water repellent wax that does not contain paraffin, silicone or other petroleum-based ingredients.

My family and I went to the military preparedness museum at Djuramosse the other day. They had an event with WWII reenactment.


I met a lovely lady from England who wore an original American Red Cross summer suit.


I’ve made some research and the suit is made of light gray wool/rayon fabric. Notice how the seams on the front shapes the jacket!
Please visist Shirley Powers site to learn more!


The skirt has six gores and a lapped zipper at the side seam. 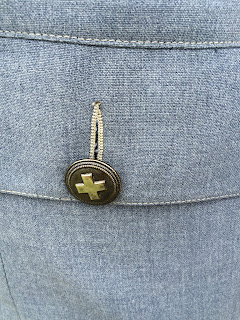 I made a pair of Ottobre Explorer, Ottobre Design 3/2015 shorts the other night. 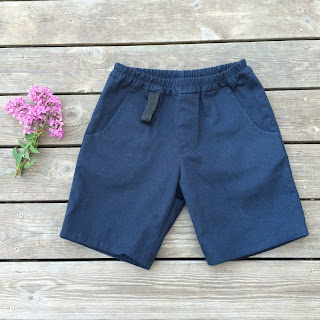 It is great to have the knowledge to maneuver a sewing machine when one discovers that the son does not have a single pair of clean shorts! Welcome to my blog! I'm Sara Ingves, and this is my little place for sharing and logging my creative projects. Most blog posts will be about SEWING, but there will probably also be some posts about cooking and gardening.
My family and I are living in Sweden. I’m the mother of two gorgeous boys, age 2 and 4, and a little girl who is 5 months old.
I love sewing, but I find it hard to find enough time. Mostly I end up sewing on late week-end nights! I hope to be able to share some fun projects with you.
Please feel free to contact me if you have any questions!